Four generations of the Ballinger family have worked to preserve a historic local treasure. The True Home at the corner of State and Church Streets stands out with its gables and white picket fences bursting with colorful flowers.

“My mother loved geraniums so my father would plant lots of them,” said Rex Ballinger, the current caretaker of the True Home.

The home was built in 1848 and housed three generations of the True family. The last family member, Henry A. True, had an addition put on the home. Rex’s grandfather, Forest Ballinger, and his father, Junior, built it.

“It’s something that our family has always taken a lot of pride in trying to keep it up and keep it looking nice,” Ballinger said.  “In the early 1950s, whenever Henry had things that needed to be repaired, he would call my grandfather’s company and they would do the work. My dad took over with the same relationship.”

Forest eventually retired from Reiger and Company. Junior and his brothers, Ray and Larry, bought a local company and turned it into Ballinger Paint and Glass. They built an office on Greenwood Avenue. Junior ran the construction side of the business while his brothers managed the paint and glass store. Junior’s wife, Marian “Nancy” Ballinger, also had a gift shop there.

When True died in 1964, he left a trust to preserve the home. Curator Sonny Copeland would call Junior to take care of projects. Junior often sent his children to complete the tasks.

“I worked up here when I was 16 years old, doing work for Henry and Sonny,” Rex recalled.

When Copeland died in the 1980s, trustee John Bartram approached Junior about being the caretaker of the estate. Junior and Nancy moved into an apartment on the property. Rex taught at Marion City Schools but spent his summers helping his parents at the home.

After Rex’s parents died, Bartram and the other trustees asked Rex and his brother, Jim, to take over. 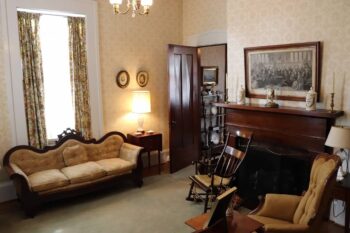 “They’ve done a fabulous job taking care of it and keeping it in tip-top shape,” Bartram said.

Rex enjoys caring for True Home. His wife, Jean, retired after 42 years as a nurse at Marion General Hospital. She also works at the landmark occasionally.

“I take a lot of pride in the way this place looks because I think it’s one of the prettiest properties in Marion. It’s something my family has always done. It’s something that I enjoy doing,” Rex said.

Now that Rex’s children have grown and moved away, college student Sofia Tinnerello assists him.

“I call her my flower queen. At my age, I can’t bend over and weed all the gardens like I used to. Sofia takes a lot of pride in the way it looks. She does a great job,” Rex said.

Rex loves to give private tours of True Home. He appreciates what Marion has provided him over the years.

“I grew up right here in Marion on Oak Street, just down from Lincoln Park. It was a great place to grow up. We had the park right there and the swimming pool and Marion Youth baseball,” Rex said.

Rex, his brothers, and his children all graduated from Marion Harding, where he served for 35 years as a physical education teacher, coach, and athletic director. Rex is excited about Marion’s future.

“I’m really proud of what’s going on in Marion and the way they are developing the downtown area,” Rex said.