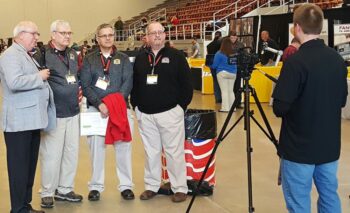 Tad Douce’s ancestors came to Marion in 1815 when his family received a military pension for serving in the War of 1812. Douce still resides on this land. He is the current Director of Educational Technology and Communication at River Valley Local Schools. He attributes his success to the mentors he has had along the way.

“The people of Marion have made me who I am,” Douce said. “One of which is my father, Everett Douce. He is 94 years old and lived a very deliberate life. He has been committed to doing things himself.”

Douce notes that his mother, Francis, went to Pleasant and gave him LEGO kits as a child. When he would become frustrated, she would spend hours encouraging him and helping him put things together. This was pivotal to his becoming interested in building and engineering.

In high school, Douce was introduced to technology education and realized he wanted to teach because of the influence of Ed Goodwin. In 2004 Douce, Goodwin, and Ritch Ramey were attending a robotics competition. The original organizers were unable to continue hosting it.  The trio decided to host the competition in Marion.

“All the community brought the National Robotics Challenge to Marion. This year we will have 1,100 students come in from nine states with 300 robots competing over three days at the Coliseum,” said Douce. “It has continued to grow since 2004.”

They began a nonprofit called EduEverything. Several years ago, they began a program called Drones in School that teaches design, engineering, and racing drones. It also fosters teamwork.

“It’s not what I’ve done, but what people have done for me that have helped me to be successful,” said Douce. “We’ve all worked together to keep this program going. It couldn’t be one person. That’s what makes Marion special – we work on things together.”

Douce worked with others to make other changes in his life. His dad encouraged him to learn to do things for himself.

“Being a lifelong learner is important. My dad always said, ‘If you want to know how to do something, then go learn how to do it.’ Someone knows how to do what you want to learn. Find a book or website.  Don’t make an excuse that you don’t know,” said Douce.

In 1999, Douce, his father, and friends researched and learned how to build his house.

“I’ve been committed to encouraging people to go do something. Don’t just sit on the sidelines and wish things to be better. Go do it!” said Douce.

“Marion needs to strive for excellence. There’s no reason we can’t have the best,” said Douce. “It’s a matter of accepting what we want. This doesn’t come from me; this comes from learning from others.” 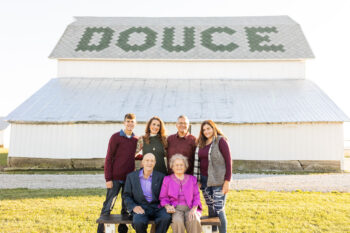 Marion has had opportunities because the people from the community have believed in its potential.

“Marion wasn’t known for high tech and robotics, but we are now the hub in Ohio,” said Douce. “When my kids say, ‘I can’t,’ I tell them, ‘We don’t use that kind of language.’ There’s no reason we can’t go out and do what we want.”

Douce and his wife, Lori, are both educators. They have a daughter, Savannah, and a son, Gabriel.

“There are so many great things in Marion and great people that have poured into me, my family, and my life. If there’s anything special, it’s these people who have made it possible for us to do what we do,” Douce said.

Douce’s hope for the future of Marion is in the people.

“We’re on the cusp of greatness. There are a lot of people in Marion who want to help and make something great,” said Douce. “I see a lot of other people stepping up and wanting to bloom where they’re planted. It’s exciting and speaks to the hopefulness of Marion.”