Love Our Neighborhoods is a grassroots group of city officials and volunteers who are not only cleaning up Marion but also improving the quality of life for many local homeowners and tenants. The group is focused on revitalizing the Marion community by improving neighborhoods.  It started in the summer of 2020 and has expanded since then.

“After a windstorm came through last summer, Mayor Schertzer received a phone call from a resident on Decatur Street who asked for help for her neighbor who was injured by a falling tree that fell on his home during the storm,” said Sindy Thrapp, Code Enforcement Coordinator in the Marion Safety Director’s office. City officials including Mayor Scott Schertzer drove around the area and saw debris, solid waste, tires, and other concerns along Decatur St., according to Thrapp.  “When the mayor returned, he talked with Officer Casey Thomas and me and asked us to assess the area.  We didn’t want to just post notices on residents’ doors. It was clear that people needed assistance. We had to think outside the box.” A meeting between Mayor Schertzer, Service Director Cathy Chaffin, Safety Director Randy Caryer, sanitation, Municipal Court probation, and the police department was organized to get ideas on the table, and a pilot project for what later became Love Our Neighborhoods was formed – starting with dumpsters on Decatur Street.

The Decatur Street pilot project in July 2020 took 2 full days. The group recorded a total of over 33 tons of trash collected, 32 vehicles brought into compliance, and over 600 tires removed. There were two properties referred to the Marion County land bank, another benefit to the community since that typically means one or more of the following situations: no one is living there/vacant property, past due or unpaid taxes, and/or deceased owner.  Total stats for 2020 neighborhood clean-ups: 136.9 tons of trash collected; 94 vehicles brought into compliance; 1,323 tires removed; 24 properties secured; and 26 land bank referrals. 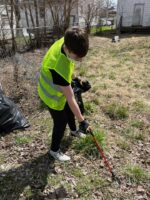 Many people are just unaware of what is legally allowed in their yard. For example, old tires, junk vehicles, and debris are problems for our neighborhoods. Other people just need assistance.  “We wondered if residents would be receptive to having volunteers come in and help clean up,” Thrapp said. “We’ve been thrilled at how well folks have responded to this effort, both the residents and volunteers. Marion Municipal Court’s community service workers have been great!  Not only has this been a win for our group and the city’s neighborhoods, but these workers have thanked the city for allowing them to be involved.  Everyone enjoys seeing local residents happy with the results of the clean-up.”

This year, the group became more official with the name and a logo, along with monthly planning meetings.  One 2-day neighborhood clean-up each month is scheduled for March through November. So far, two large projects in 2021 have resulted in 135 tons of trash collected, nearly 10 tons of brush, 26 vehicles brought into compliance, 740 tires removed, and 10 properties secured. The next Neighborhood Clean-Up is set for May 26th & 27th.  “Council members have been a tremendous help by walking door-to-door passing out flyers informing residents of the upcoming clean-up.  We’ve averaged 40-50 volunteers each day.  Everyone is so proud, it’s like a race to put the stats together after each clean-up,” Thrapp said. “It really has been fun – even in the rain!”

According to Thrapp, local residents have made comments like, “Now I can see my granddaughter jumping on the trampoline (outback)!” and “I’m so excited…we can have a cookout now!”

Several local businesses have volunteered and/or have donated to the projects.  Wyandot Snacks has volunteered around 70 employees for an upcoming clean-up event on June 4th. For a complete listing of the area organizations and businesses involved in this effort, check out Love Our Neighborhoods’ active Facebook group: City of Marion Love Our Neighborhoods | Facebook. Supplies can be donated (i.e., brooms, paint, trash bags, rakes, etc.) by dropping them off at the Safety Director’s office, 3rd floor City Hall in Marion.