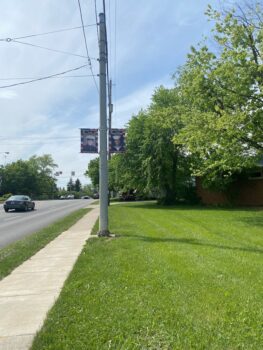 Marion County is using the banner project to recognize and honor veterans of all branches of service. Dick McDannel, a Korean War Veteran, challenged his peers to bring this project.

“Veterans currently serving, retired from the service, separated from the service with an honorable discharge – all veterans can be honored through the banner project,” according to Randy Drazba, the secretary at Chapter 1117 Vietnam Veterans of America.

Eligible veterans are those who were residents of Marion County upon entering active-duty service or veterans who currently reside in Marion.

While Drazba leads the project, he notes it would not be possible without many others who joined.

“Penny Richardson worked tirelessly throughout the campaign, and she is not even a member of our chapter or its auxiliary. She assumed this assignment like it was a full-time job,” said Drazba.

Another necessary part of this project was someone who was a computer programmer in both the military and his civilian life. 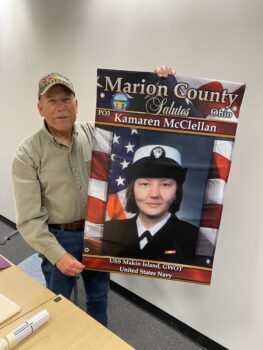 “Larry Elliott’s work in preparing spreadsheets helped us organize the purchasers of banners with the veteran’s banner, location of utility poles on various streets, location of veteran’s banners, and more,” Drazba said. “We would have been lost without his valuable participation on the committee. He worked tirelessly to accomplish these tasks!”

Additional committee members include Art Cheney, Ned Phelps, John Danner, John Stallsmith, and Bruce Lehman. All are Vietnam veterans who worked on the committee to plan the campaign and then jumped in where needed to perform important tasks.

Drazba believes the City of Marion was great to work with on this project.

“Jim Bischoff directed us to the various contacts at First Energy and Frontier Communications to request permission to use their utility poles,” Drazba said. “He also advised us how we needed to prepare our materials to facilitate work on the bucket trucks.”

Eric Hipsher, Mitch Roberson, Keith Price, and Todd Chase worked under the guidance of Scott Kurz to hang the banners. They checked out all the details to make sure the banners were mounted straight and taut. 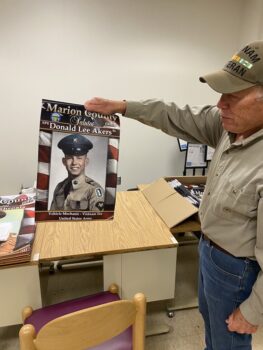 “They take great pride in their work,” Drazba beamed.

The group was assisted by many other people who gave their time to help advertise this project. Terry Cline helped connect the group to many contacts.

“It must have worked, or we would not have had such an outstanding sale of banners this year,” Drazba said of the over 300 banners they have sold.

Marion Technical College has been a cheerleader for the project. Mike Augenstein allowed the group to store materials in the Downtown Marion Tech building. Laurie Vent and Carey Wolf spent many hours during sales events at the Prospect Room of the County Administration Building typing and scanning banner applications to Troop Banners.

“No way could we have accomplished this sale volume without MTC’s help,” Drazba said gratefully.

The committee had extensive discussions about what to charge for the banner and support brackets.

“We decided to match the price charged by Hardin County which was placed into effect three years ago. Our goal is to try to break even,” Drazba said. “We will use any profits derived from banner sales and donations from other military organizations to purchase banners for the Marion County Vietnam Veterans who paid the ultimate sacrifice in Vietnam. The bottom line is this project is not a money-making event for Chapter 1117.”

Chapter 1117 Vietnam Veterans of America was just a catalyst for the Marion Military Banner Program which was and is a community event. Drazba’s chapter has a goal of helping homeless veterans. They have few fundraisers throughout the year. They also do other activities throughout the year to support veterans.  Banner sales will begin again in the fall.