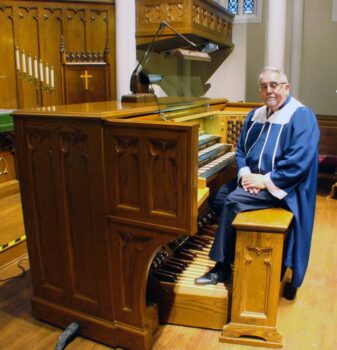 For 63 years, Allan R. Lust has been making music as a church organist.  He started at Cardington Methodist Church at 16. Lust served as organist at Trinity Baptist Church in Marion for 15 years. He directed the adult choir, adult and senior handbell choirs, women’s trio, and women’s octet. He served as senior organist and minister of music for the past 45 years at Emanuel Lutheran Church, starting in 1976.

“Allan is a special gift to Emanuel. His music always enriched our worship,” said Pastor Jones of Emanuel Lutheran.

Growing up, Lust’s mother, Mildred, made him practice piano every day after school. His father, Merle, sat nearby to supervise.

Lust attended Oakland Evangelical United Brethren Church, which is now Oakland United Methodist Church, in Marion in his youth.  He studied organ for a year with Gene Decker, Oakland’s organist.  He honed his skills playing at revivals.

Lust enjoyed highlights in his career.  He directed the Marion Lecture Recital and the Marion Bicentennial Chorus and Orchestra.  He presented several organ recitals in the Marion area and conducted a 30-piece orchestra and 60-member choir of the Brahms Requiem.

“For all of his talents and abilities, he is very humble – never failing to acknowledge and thank God for every blessing of the day,” shared Teri Turner, Praise Team director at Emanuel.

When in Marion, Lust proudly served as accompanist for Otoniel Gonzaga. Gonzaga, brother of Ednita Vaflor, was a professional opera singer, who performed throughout Europe and the United States.

“Lust was his official accompanist in Marion,” Vaflor said. “We were so confident in his ability.”

Lust recalls one Christmas Eve when Tanyce Addison, Emanuel’s choir director at the time, asked if he could find music for The Lord’s Prayer in a certain key. He remembers not being able to find it. Finally, he started playing by memory, eyes closed, perfectly.

Deacon Kevin Kehn added, “Allan is the consummate church organist. His dedication is exemplified by his desire to not only be part of Sunday worship but also to play for other occasions, especially funerals.  He will be remembered as a true servant of the Lord.”

Lust and his wife of 47 years, Sandy, reside in Delaware.  They have two daughters, Jennifer (Chris) Cooke and Katy (Matt) Stevens; three living grandsons, Joshua, Micah, and Jacob; and one heavenly grandson, Caleb.  They were thrilled to be chosen Music Family of the Year for the state of Ohio in 1990.  Their home was always filled with music.

Stevens said, “Growing up with such a talented dad was more of a blessing than I even realized at the time.  It’s easy to take really good music for granted when it’s the norm – and we always had really good music!  Our shared passion for music was a beautiful binder in our home among the four of us.”

“It never fails to make my heart swell when I listen to my dad play.  Listening to the pipe organ fill the sanctuary with incredible music is one of my favorite memories, and it always fills me with joy.  Watching my dad create something that touches people’s hearts and lives, along with his humbleness, sincerity, and love for others, has inspired me to try to be that kind of musician and person.  I’m so thankful for him,” said Cooke.

“Life with such a talented husband,” Sandy Lust said, “has been a true godsend.  I love being treated to my own personal concerts as I listen to him play the piano at home.  The minute his fingers touch the keys, whether organ or piano, I can feel the heart and soul he pours into his music. God has certainly blessed us beyond measure.”

“I have never taken my talent for granted,” Lust said.  “I know it is from God and I have always tried to use it for His Glory.  I’m not a performer, just a servant of the Lord.”