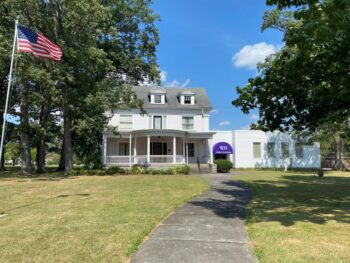 Marion Women’s Club and home both became designated as national historic sites in December 2019. Records were found in a cedar closet located inside the home dating back to 1895. Club meetings began in the home in 1905 after it was built by Shauck Elah Barlow and Ida Harsh Barlow. It was donated in 1945 to the Marion County Federation of Women’s Clubs.

The current club president, Nancy Hafer, began her office in May 2020.

“The club is totally women supported, and women driven,” Hafer says of the club, “Their mission back then is our mission today.”

According to their website, “The Marion County Federation of Women’s Club Inc. mission is to ​​preserve the historic home and enriching and empowering the lives of the women of Marion County.”

Work is being done inside the home to preserve the club and its history as the house is becoming a museum.

“This is not just to tell the club story, about it making Marion a better community, but to tell the story about the Barlow’s who built the home,” says Hafer.

Keily Cunningham, a professional archivist who has been involved in the club since June 2020, has been volunteering her time to help preserve the rich history of the club. A local family recently found past programs from the club and gave them to the Marion County Historical Society, who delivered them to the club.

The club federation has been part of a national, state, and local movement. In the 1920s and 1930s, there were women involved in the local club who held state and national offices. Historically the club was involved in civics, as well as with children and the community. They ensured children were receiving school lunches and hired a school nurse as well as bought her a car with club funds. Additionally, they were instrumental in starting a hospital in Marion.

The club has advocated for public safety when there were concerns in the past for no railroad crossings in town. They also tried in their own way to support health and wellness.

The club is still an active part of the community, currently hosting a fall women’s series on Ohio women authors. The last two dates for the forum will be October 7 and November 4. Looking towards the future, the club prepares for the third Turn Up the Heat dance competition in March 2022. They have a goal in the museum to develop a curriculum for student groups and work with students in getting experience for future jobs by helping archive information.

The club wants to help others connect and socialize. They have a desire to be inclusive and welcome every woman, regardless of background, professional or not,

or their interests. If someone is wanting to tap into mentorship or support, they want to provide it.

“Young women should want to join because there are ways to change the community. When we’re diverse, we can get a different point of view,” says Cunningham.

“Now that Marion is more multicultural than in the past, we want the club to reflect the diversity of the Marion community,” Hafer says.

Cunningham wants to assure other families who find club memorabilia, that the club can scan the information to archive it and return it to the family. They are most interested in pictures, whether in the home, at clubs or activities.