Accomplished Musician. Entrepreneur. Teacher. Producer. Curious Community Connector.  Jason Gittinger said he has had “no trouble making stuff happen” throughout his life.  Born in Marion in 1977, Gittinger graduated from Harding High School in 1995 and has been touted as “…one of Detroit’s most versatile studio and live drummer/percussionists.” A graduate of Wayne State University (jazz studies major) in Detroit, Jason has studied with some of the drumming community‘s most notable teachers.

With musician parents, Jason was raised with a strong focus on music and performing. His parents owned Del’s Music Studio in downtown Marion, they performed at weddings and other local events with their band Del & Company and spent many years playing with the Marion Community Band, theater pits, and the worship band at Marion First Church of the Nazarene. “Bill Swihart, some other local music leadership, and my dad started the Marion Summer Concert Series many years ago,” Jason said. Another local musician and telecommunications teacher at Harding, David K. Johnston, was the drummer for Gittinger’s parents’ band and Jason’s inspiration for playing drums. It was tough in those days, Jason recalls. “If my parents and Dave didn’t have a weekend wedding gig at the Marion Country Club, we didn’t eat,” he said, grinning.

The Gittinger family lived on Summit Street. Besides performing in their band, Jason’s parents had day jobs. Nadine Gittinger, Jason’s mom, who still lives in Marion, was the music teacher at Pleasant Elementary. Jason’s dad repaired organs, tuned pianos, wrote arrangements, and did anything and everything in music with his Del’s Music Studio business. Unfortunately, he died in a motorcycle accident in 1999.

From a young age, Jason started on the pathway of musical performance with a strong thread of making things happen for others. In high school, Jason played in every possible musical group he could. The Marion Community Band, Harding Marching Band, Choir, Show Choir, Stardusters Jazz Band, and countless (66 actually) theater pit orchestras for Harding, River Valley, Pleasant, and the Marion Community Theater. He played at Marion First Church of the Nazarene and generally just said yes to every musical opportunity that came up. During his college years, Jason played drums at Cedar Point Amusement Park in the summers where he met his wife Sherry. This led him to Detroit, where he became a fixture on the music scene, so much so, that he now participates in arts leadership on many different levels of the community. “I just want more and more people to have the musical opportunities that were given to me, and a community of others to support them as I had in Marion as a kid,” said Jason. 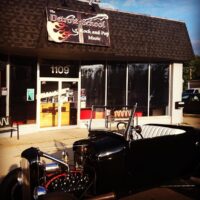 By leading bands and production companies, Jason has been an active drummer and has recorded music on a regular basis. But, growing up in the small-town atmosphere of Marion, he’s also big on helping people. “Through our music school, we’ve created a system that does more for the student than merely personal instruction. It gives them the opportunity to put ideas into action.” The Detroit School of Rock and Pop Music, which the Gittingers established over 13 years ago, takes pride in being “more than just music lessons.” The school offers workshops, summer camps, recording sessions, live performance opportunities, and of course, private music lessons. In fact, Jason said, “We’ve done summer camp (performing) tours across the country, and played concerts in Marion!”  The school’s tagline is “Stop Practicing… Start Performing.”

Jason works to connect the school to regional and local events, participating in festivals and such. The number of part-time staff is between 12 and 15 teachers, some of whom have been on Saturday Night Live and toured with major acts worldwide. Jason himself has toured throughout most of Europe and the U.S.

The Greater Royal Oak Chamber of Commerce named Jason Gittinger Business Person of the Year in 2019, in part for his “non-stop volunteerism.” Jason was a founding member and chaired the city’s Commission for the Arts since its inception in 2012. Taking a page from his Marion roots, Jason was instrumental in developing the city’s Summer Concert Series. He even created a “public piano project” putting artfully decorated pianos all over the community for people to play which is a tip of the cap to his father’s Marion, Ohio piano business past. Marionites, Beth Fox (Jason’s sister), husband Matt, and daughters Zoe, Zara, and Trinity (all Pleasant Local Schools graduates) travel from their home near Waldo to Detroit each spring to help paint the pianos and prep the project.

His advice to anyone who feels pulled by the music world, and maybe has an entrepreneurial spirit: “You can get your feet wet in the music world in Marion, Ohio. Start something, and connect it to the universe…”